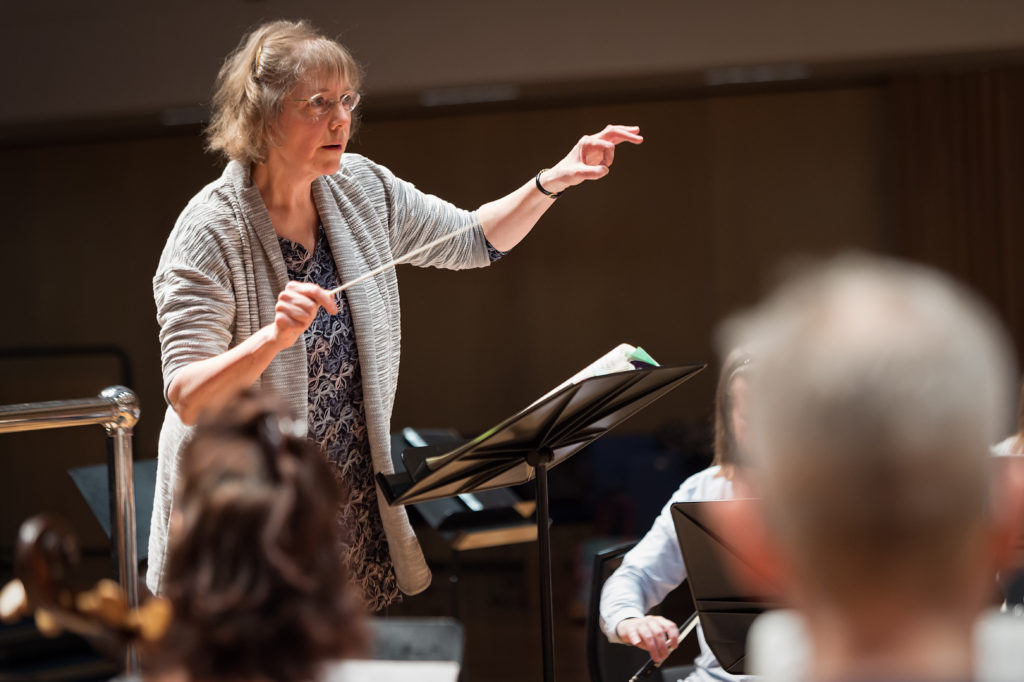 Janet conducts choirs of all sizes and singers of all ages. In the past these have included the New Cambridge Singers, the Orpheus Choir of North Herts and St Albans-based Carillon.

Now as the long-standing MD of the much-admired Saffron Walden Choral Society since 1992, Janet has directed a huge range of the choral and orchestral canon, from the Monteverdi Vespers through to the Britten War Requiem and beyond, via music by Bach (including the passions and the B Minor Mass), Handel, Mozart, Haydn, Beethoven (Missa Solemnis), Rossini, the Brahms and Verdi Requiems, Mendelssohn, Bruckner, Poulenc, Elgar (Dream of Gerontius), Vaughan Williams, Stravinsky, Howells, John Rutter, Jonathan Dove (There Was a Child) and many more.

Janet has also planned a series of large-scale community singing events run by SWCS. She has composed a number of her larger works for these projects.

As chorus master for Saffron Opera Group since its formation in 2014, Janet has prepared choruses for Stravinsky Rake’s Progress, and Wagner’s Die Meistersingers and Götterdammerung, with Parsifal coming up in September 2018.

On a smaller scale, she founded her chamber choir Granta Chorale in 2007 and – with the help of Yellow Car Charitable Trust – the youth choir SignuptoSing in 2010. She continues to direct both these choirs and the latter is now being run as part of Saffron Walden Choral Society.

She continues to enjoy working with young singers and players, directing a number of other choirs and orchestras, at both primary and secondary schools.

Janet is fortunate that many of the groups she directs are able to perform regularly in the wonderful acoustic of Saffron Hall, and she was privileged to conduct the very first performance when the hall opened in 2013 – the Verdi Requiem with Saffron Walden Choral Society and Chameleon Arts Orchestra.

While producing BBC School Radio programmes back in the 1990s Janet worked with many young choirs in the recording studio and developed many trouble-shooting choral strategies. Since then she has studied vocal technique with a variety of teachers, including training in the Estill method, and is available to run choral workshops.